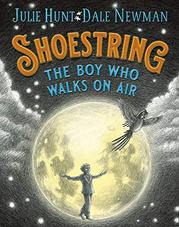 SHOESTRING, THE BOY WHO WALKS ON AIR

Love and loyalty are put to the test when a young aerialist becomes the pawn of a bereaved mother bent on vengeance.

Taking place after the events of KidGlovz (2015), this companion novel follows a closely knit group of traveling performers. They turn a road trip into a rescue mission when a pair of scene-stealing (and genuinely creepy) gloves once belonging to accordion virtuoso KidGlovz transform his best friend and midair marvel, 15-year-old reformed pickpocket Shoestring. He relapses, becoming a secretive, self-absorbed thief with less and less control over his actions. As before, both the all-White cast, which is largely composed of loving adults and unusually talented young people, and Newman’s sheaves of softly textured, technically accomplished pencil drawings immediately bring to mind Brian Selznick’s illustrated stories. So does the way the characters outshine the plot—though the story does take several surprising and imaginative turns on its way to a tense, melodramatic climax. Readers get to know Shoestring’s adoptive mother, May, Queen of Hearts; the cruel, vicious dowager Mistress Adamantine; and a host of other colorful characters. In the end, all, gloves thankfully included, receive just deserts…though even as they hiss the thoroughly fiendish villain, readers may feel a twinge of sympathy for the offender.

Both cheer- and shiverworthy, strong in narrative and visual atmosphere. (cast of characters)