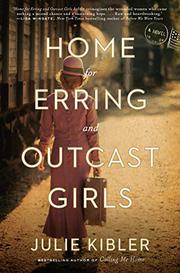 HOME FOR ERRING AND OUTCAST GIRLS

In 2017, Cate moves to Arlington, Texas, mostly, the reader gathers, to escape her past. Employed by the University of Texas as an assistant librarian, Cate becomes obsessed with the musty records of the Berachah Industrial Home, a church-run shelter for women and girls then known as fallen, erring, or wayward—abused women, some pregnant out of wedlock, often forced into prostitution. Cate also visits Berachah’s only remaining vestige, its cemetery. Interspersed with Cate’s story are scenes from early-1900s Berachah, where Mattie, an unwed mother, and Lizzie, who was raped by her stepbrother and deserted by husband and family, relate their experiences in close third-person narration. Mattie’s ailing son dies as she arrives at the home, and her one attempt at prostitution has left her pregnant. Taken in by Berachah along with her young daughter, Lizzie goes through heroin withdrawal. The momentum of the first half of the book is sluggish. Cate’s first-person narrative ranges between the present and 1998 during her senior year in high school. The only daughter of fundamentalist Christians, she is deeply enmeshed in her church community. Much space is devoted to a deceptively anodyne account of falling in love with new classmate River while being asked to the prom by the church golden boy, Seth. In the second half of the book, conflicts finally emerge. For the Berachah girls, it’s Mattie’s bid for independence in Oklahoma City and Lizzie’s ill-advised decision to return home to her mother. A major development in Cate’s teenage life is withheld until later in the book, and readers may question how Cate, as the narrator, could censor her thoughts as to such a crucial revelation. Readers may also question the relevance of the parallel narratives until compelling ironies emerge. Not least of these is the role of fundamentalist Christianity: as rescuer in Berachah’s time, as oppressor in Cate’s.

As this novel powerfully illustrates, the terminology has changed but gender discrimination persists.