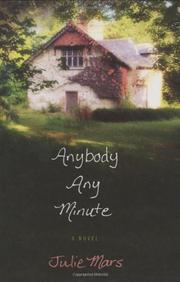 In this charming coming-of-middle-age novel from Mars (The Secret Keepers, 2000, etc.), a neurotic New Yorker loses her job and possibly her marriage when she buys a rundown country house.

Ellen Kenny still thinks of herself as a free spirit. But the young woman who skinny dipped on Cape Cod has turned into a nervous 40-something who was fired after speaking her mind. In her quest for “ipsissimus,” the quality of being most herself, she acts on a whim, buying a ramshackle old house in upstate New York on the way to visit her more centered younger sister in Montreal. The house, which she views as a source of adventure, soon flips her life into crisis. Her straight-laced husband Tommy refuses to deal with it, and Ellen takes off alone, afraid that she has pushed him too far. In rural Eagle Beak, she finds bugs, dirt and eccentric locals, including the angry sculptor son of the house’s late owner and an ex-biker neighbor, whose happiness seems permanently threatened by an unusual ailment. They in turn see her as an object of amusement. Gradually she learns to fit in and rediscovers her original, spontaneous self. When a crisis overcomes her sister, however, her newfound balance is tested. As she cares for her sister’s toddler, as well as her quirky new family of choice, Ellen discovers a life that works for her. Mars leavens Ellen’s potentially annoying idiosyncrasies with sly humor, and she revels in her heroine’s ’60s-cum-New Age mentality. “[S]he had raised the anchor and sailed away from her former self. She had left her baggage on the cosmic dock,” Mars writes without irony.

Whether she’s fretting about her weight or worrying if she is correctly quoting Kahlil Gibran, this ’60s survivor is a hoot.