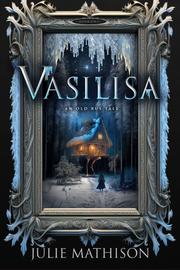 In this middle-grade fantasy/historical novel, a Russian American girl journeys into folklore to confront witches and save her family.

Vasilisa Petrovna Nikolayeva and her Babka (grandmother) were both named for Vasilisa the Brave, the Russian fairy-tale hero who overcomes Baba Yaga, a fearsome witch. Now 13 years old, Vasilisa still loves to hear her mother and grandmother tell the stories, which link their present-day lives in the 1919 steel town of Edenfall, Pennsylvania, to their homeland. The three cling even closer because Vasilisa’s Papa has been missing since fighting in the trenches near Flanders, presumed dead. The family’s financial difficulties have been lessened by the frightening Mr. Goladyen, also a Russian immigrant, who is pressuring Vasilisa’s mother to marry him. Further, Vasilisa suspects he has something to do with her once-hale grandmother’s sudden decline into confusion and weakness. Meanwhile, Ivan Ivanovich Volkonsky arrives in Edenfall, having promised his dying father to help the elder Vasilisa. Discovering that Mr. Goladyen was his father’s betrayer, Ivan vows revenge. To set things right, young Vasilisa and Ivan must go on a quest to legendary Old Rus, face three Baba Yaga witches, and find an ogre’s egg. In this series opener, Mathison offers two intriguing settings from history and myth, both with their own spooky mysteries, hardships, helpers, and villains. While the Edenfall scenes are well drawn, the storytelling becomes truly compelling in Old Rus, as myth comes vividly to life. The latter setting also better fits the book’s literary, Old World phrasing used throughout (such as, “Always was my daughter thus”), which feels jarring against Edenfall’s slangy American voices (“What a whopper”). Though usually a graceful writer, the author overuses quirk as a transitive verb.

A story that richly integrates a fairy tale, history, and a coming-of-age quest.