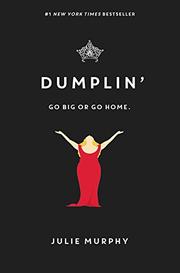 From the Dumplin' series, volume 1

In a small Texas town, a confident fat girl confronts new challenges to her self-esteem.

At age 16, Willowdean—her mother calls her Dumplin’—has a good sense of herself. She’s uninterested in Mom’s raison d’être, the Clover City Miss Teen Blue Bonnet Pageant, which annually takes over the town and Will’s own house. Mom won once and now runs the pageant, dieting to fit her old dress and pressuring Will to diet too. Will doesn’t. She mourns her beloved aunt Lucy, a second parent to her who died six months ago, and simmers with pleasure over a new, hot, sort-of-boyfriend. However, his touch makes Will panic with newfound insecurity. She loses him, loses her old best friend, gains new social-outsider buddies (a familiar trope)—and finds triumph somewhere amid Dolly Parton, drag queens, breaking pageant rules, and repairing relationships. The text refreshingly asserts that thinness is no requirement for doing and deserving good things, that weight loss isn’t a cure-all, and that dieting doesn’t work anyway. The plot arc, amazingly, avoids the all-too-common pitfall of having its fat protagonist lose weight. Unfortunately, Murphy loses her step and undermines her main point in the mournful, cringeworthy details of Lucy’s death and life, which are blamed on extreme fatness rather than unfairness.

In the end, it’s more liberating than oppressive, with bits of humor and a jubilant pageant takeover by beauty rebels to crown this unusual book about a fat character.