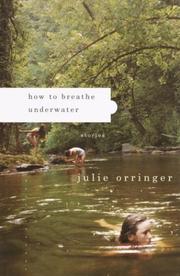 HOW TO BREATHE UNDERWATER

Mordant snapshots of lives under stress.

As a career calling card, one could definitely do worse than this debut collection of nine stories. In the opening piece, “Pilgrims,” a simple Thanksgiving Day visit by a family to the house of some friends takes a macabre turn when the game being played by the children in the backyard goes too far. This dark-tinged flavor is echoed in “Stations of the Cross,” the volume’s climactic story, which has deeper things on its mind—the travails of a Jewish girl trying to figure out where she stands in an almost entirely Catholic small Louisiana town—before going off the rails with a children’s reenactment of the Crucifixion that starts to mirror a lynching. If Orringer has a problem, it’s one endemic to the modern short story: that these are for the most part still lives; they don’t go anywhere. “The Isabel Fish” is an extremely competent and well-wrought tale about a teenaged girl who recently almost died in a car wreck that killed her older brother’s girlfriend—something he now hates her for, a strange variant of survivor guilt. But as convincingly as Orringer is able to travel the strange by-ways of the adolescent mindset, there’s no movement in the story, just the usual onionskin peeling away of memory until the details surrounding the primal crash are revealed. One piece that breaks the mold is “Stars of Motown Shining Bright,” in which a young girl (another one) is made an accomplice by a friend who’s planning to elope with a guy who doesn’t exactly seem like husband material. While it’s not the best entry here, it at least progresses from A to B and gives you a reason to persevere to the final lines; it’s unlike most of these stories, which just peter out, albeit in a quiet and artful manner.

Still, Orringer stakes out some ground for herself with these compact little pieces about growing up in tough circumstances.