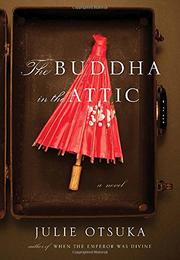 THE BUDDHA IN THE ATTIC

Otsuka, whose first novel (When the Emperor Was Divine, 2003) focused on one specific Japanese-American family’s plight during and after internment, takes the broad view in this novella-length consideration of Japanese mail-order brides making a life for themselves in America in the decades before World War II.

There are no central characters. A first-person-plural chorus narrates the women’s experiences from their departure from Japan until they are removed from their homes and shipped to the camps, at which point the narration is taken over by clueless whites. Rather than following an individual story, Otsuka lists experience after experience, piling name upon name. Voyaging across the Pacific to California, the women’s emotions range from fear to excitement, but most, even those leaving behind secret lovers, are hopeful. Reality sets in when they meet their husbands, who are seldom the men they seemed from their letters and photographs. And the men’s reactions to their new wives vary as much as the women’s. Some are loving, some abusive. For all their differences, whether farm workers, laundrymen, gardeners or struggling entrepreneurs, they share a common outsider status. Soon the majority of women who stay married—some die or run off or are abandoned—are working alongside their husbands. They begin to have babies and find themselves raising children who speak English and consider themselves American. And the women have become entrenched; some even have relationships with the whites around them; many are financially comfortable. But with the arrival of the war against Japan come rumors. Japanese and white Americans look at each other differently. Loyalty is questioned. Anti-Japanese laws are passed. And the Japanese themselves no longer know whom to trust as more and more of them disappear each day. Once they are truly gone, off to the camps, the whites feel a mix of guilt and relief, then begin to forget the Japanese who had been their neighbors.

A lovely prose poem that gives a bitter history lesson.