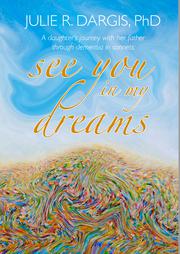 SEE YOU IN MY DREAMS

A Daughter’s Journey With Her Father Through Dementia in Sonnets

A daughter remembers her father, his dementia, and their last times together in this collection of poetry.

The morning of the day she received the call informing her that her father had died, Dargis was inspired to write a sonnet about caregiving. Her father developed dementia after experiencing a serious fall, which was followed by a rapid decline in his health. The book is divided into two parts, with the first section recalling his period of rehabilitation in a hospital. The second portion recounts his time in hospice. The collection’s title refers to the parting phrase the author spoke to her father when visiting hours ended. Dargis’ poetry captures a broad range of aspects of life as a caregiver to an elderly parent. The opening poem, “A Contradiction,” effortlessly depicts the brutal reality of dementia: “Not known for its precision. Like an old / Timex ticking well enough, but still not / Ready to cease.” The volume describes her father’s moments of unexpected lucidity, other patients on his ward, and his gradual slipping away: “I missed him, even though I was with him.” Dargis’ sonnets plainly describe the everyday experiences and fluctuating anxieties of a caregiver, as in “The Time Traveler”: “James, the nurse, came in with the / Blood pressure machine. It was lower than / Normal. Could he be in a state?” She is nevertheless acutely aware of the toll that these experiences have on her and that she must fortify herself, as demonstrated in “Sparring With Pugs,” an example of her understated yet impactful use of imagery: “I slip my mind into the mottled glove / And tighten the strings.” This is a deeply personal document, and those unacquainted with the poet’s family are left to guess the identities of individuals mentioned throughout: “Roger and Shirley smiled. / I bowed to Tamiko.” This does not detract significantly from the volume’s wider appeal, as Dargis succeeds in exploring the spectrum of emotions felt by all caregivers, from hope to resignation. Offering a list of caregiver resources at its close, this tenderly observed and moving collection will particularly resonate with poetry lovers faced with similarly challenging circumstances.

Well-crafted, heart-wrenching, and courageous poems about love and pain.