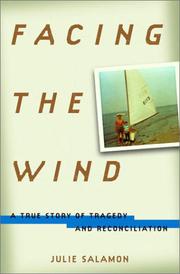 A True Story of Tragedy and Reconciliation

A suspenseful, well-researched account of the life of a Brooklyn lawyer Robert Rowe, who murdered his wife and three children and escaped prison with the insanity plea in 1978.

Does mental illness excuse one from murder? Salamon (The Christmas Tree, 1996, etc.) draws on court and hospital records, Rowe’s diaries, and her interviews with the people who knew him to explore the psychological dynamics of his crime from every angle. His marriage to his first wife, Mary, seemed idyllic until their second son, Christopher, was born with severe visual and neurological impairments. Eventually the Rowes joined the Industrial Home for the Blind (IHB)—a support group in which parents, mostly mothers, discussed the emotional challenges of raising disabled children. The author’s sympathetic portraits of IHB members reveal that homicidal thoughts were common among such parents, forcing readers to realize the personal pressures that contributed to Rowe’s madness. During the 1970s, Rowe began to suffer from an undetermined mental illness that prevented him from working. Heeding what he claimed to be the wishes of his late mother, he bludgeoned his wife and three children to death with a baseball bat. Charged with four counts of second-degree murder, he was sent to Creedmoor Psychiatric Center for ten years. Salamon devotes the second half of her investigation to Rowe’s second wife, Colleen, who—although aware of Rowe’s crime—gave birth to his fourth child. In the final chapter, after Rowe has died of cancer, Salamon allows the women of IHB (who once admired the magnetic murderer) and Colleen to debate Rowe’s right to evade punishment and create a new family. While Salamon concludes that Rowe believed himself to be a victim of mental disability and refused to accept responsibility for his actions, she encourages readers to make the final judgments.

A perturbing read that prods us to ponder guilt and innocence from new perspectives.