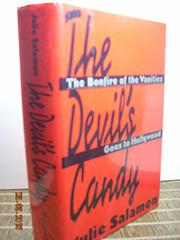 The Bonfire of the Vanities Goes to Hollywood

Engaging, in-depth study of how Tom Wolfe's The Bonfire of the Vanities was transferred from megahit book to megaflop movie; by the film critic of The Wall Street Journal, novelist of White Lies (1987). With an okay from Brian de Palma, Bonfire's director, Salamon jumped on board early, when only Tom Hanks had been hired to play Sherman McCoy. She charts the movie's birth pains, financing, script revisions, casting, location-scouting in the Bronx and Manhattan, the New York shoot and the Los Angeles shoot, second unit work for backgrounds not directed by de Palma, editing, sound mixing, scoring, previews around L.A. and in Boston, reediting, advertising, premiere, and reviews. Salamon keeps a steady interest both in the artisans and the mechanics of their art without ever quite finding a voice of her own (say, like Pauline Kael's) or revealing how her presence on the scene may have affected anything. ``The devil's candy'' is a phrase from Peter Guber, the movie's original producer, which means both the actress to be cast as Sherman's mistress and the orgasm of instant success, as in E.T. or Batman. The book's embattled center is de Palma, who is rescued from his ghoulish image in suspense films, and would be the book's tragic hero were the abortive film a tragedy instead of a creative misfire from the first script and first compromise onward. Even so, this movie struck its makers as ``the definitive vehicle of dreams...the stretch limo of hopes and ambition.'' Stephen Spielberg's take on what happened is right on target: ``Brian is stepping into shoes that can be worn by other film makers. When he does that he's caught up in the machinery of the studio system.'' Like watching a World Trade Center tower topple onto Wall Street. (Eight-page b&w photo insert—not seen.)