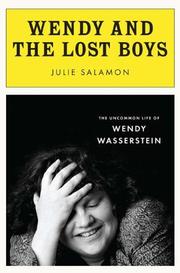 WENDY AND THE LOST BOYS

The Uncommon Life of Wendy Wasserstein

From veteran nonfiction author Salamon (Hospital: Man, Woman, Birth, Death, Infinity, Plus Red Tape, Bad Behavior, Money, God and Diversity on Steroids, 2008, etc.), the authorized biography of the playwright who brought the dreams and disappointments of her generation of women to the American stage.

Though she was the first female playwright to win a Tony Award and a Pulitzer Prize (for The Heidi Chronicles in 1989), Wendy Wasserstein (1950–2006) never entirely escaped the judgment of her overbearing mother Lola, whose comment about the Pulitzer was, “I’d be just as happy if she’d marry a lawyer.” That wasn’t going to happen: Wasserstein’s most intimate relationships were with gay men such as playwrights Christopher Durang and Terrence McNally, nonprofit theatrical impresario André Bishop and costume designer William Ivey Long. She jokingly referred to them as her “husbands” and enlisted McNally and Long in her attempts to conceive a child, but it was characteristic of Wasserstein’s seemingly open but profoundly private nature that when she did finally give birth to daughter Lucy in 1999, no one knew precisely how she had arranged it. She was similarly secretive about the leukemia that killed her at age 55. Her conflicts and contradictions were as extraordinary as she was, yet plays like Uncommon Women and Others, Isn’t It Romantic, The Sisters Rosensweig, and most of all The Heidi Chronicles voiced the experiences of her peers, women who expected to have careers as well as families and painfully discovered that having it all wasn’t going to be easy—or maybe even possible. Salamon does a capable job of covering Wasserstein’s professional life, including her grad-student days among the legendary mid-’70s Yale Drama crowd that also featured Meryl Streep and Sigourney Weaver. The author’s  real interest, however—and where the book excels—is in elucidating Wasserstein’s complex personality and the creative, unconventional life she fashioned for herself, balancing fraught but committed family ties with a busy social life teeming with devoted friends who in the end shared drama critic Frank Rich’s assessment that they “had somehow failed to see Wendy whole.” That was, Salamon suggests, because she didn’t want them to.