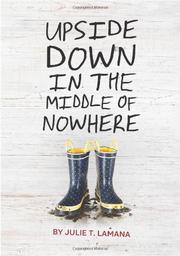 UPSIDE DOWN IN THE MIDDLE OF NOWHERE

As Armani Curtis’ 10th birthday approaches, so does something far more ominous—a threatening storm in the Gulf of Mexico called Katrina.

Armani’s family, residents of New Orleans’ Lower Ninth Ward, doesn’t have much in the way of material comforts, but they certainly have a strong and happy family, at least until Katrina blows in. During Armani’s birthday party, the family is informed that the mayor has ordered an evacuation, but lacking the means to escape New Orleans, they must simply hunker down until the floodwaters force them to the roof. First, Armani’s beloved grandmother dies, and then her father and brother are swept away by the floodwaters. When the rest of the Curtis clan makes its way to the Superdome, Mama must seek help for her sick baby boy, leaving Armani to get her two little sisters to a shelter until the family can be reunited. A couple of false notes notwithstanding, Lamana goes for and achieves realism here, carefully establishing the characters and setting before describing in brutal detail, beyond what is typical in youth literature, the devastating effects of Katrina—loss of multiple family members, reports of attacks in the Superdome, bodies drifting in the current and less-than-ideal shelter conditions.

An honest, bleak account of a national tragedy sure to inspire discussion and research.