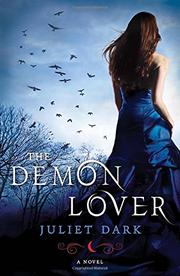 Literary gothic novelist Carol Goodman (Arcadia Falls, 2010, etc.) takes on a Mary-Sueish pen name for this contemporary fantasy about an academic who discovers the truth behind the myths she studies.

Cailleach “Callie” McFay, a newly minted doctorate and author of a popular book on demon lovers, accepts a teaching position at Fairwick College, a small liberal-arts college in upstate New York, based on the strength of their folklore department and a desire to buy a home near the college. The department is so strong because its information comes right from the source: Many faculty members and locals are fairies, witches, demons and other assorted magical beings, and Callie learns that she is among their number. Moreover, the home that so appealed to her is historically favored by an incubus. Although the incubus offers her hot supernatural sex at night, he’s also leeching Callie of her life substance, so she performs a banishing ritual. The incubus seems to vanish, but not long afterward, Fairwick hires Liam, an attractive Irish poet, and he and Callie begin having mind-blowing sex. Could there be a connection between Liam and the incubus? (Is there actually any doubt?) “Juliet Dark” clearly knows what she’s talking about when it comes to academia and folklore; it’s odd that her protagonist seems to know so little about the latter, given that she’s supposedly an expert in that area. The solutions to the central mysteries of the book are almost painfully obvious; however, the final confrontation between Callie and the incubus still holds some surprise and complex emotional texture.

Steamy and nuanced, but ultimately a fairly predictable entrance into the already overcrowded paranormal romance genre.