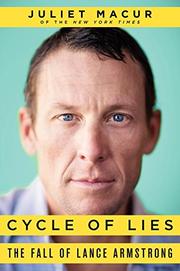 The Fall of Lance Armstrong

The definitive—well, until the next exposé comes along—account of cycling champion and charlatan Lance Armstrong’s well-oiled career and its sordid collapse.

New York Times writer Macur begins with a set piece, our fallen, disgraced hero having been found out and forced to leave his comfortable digs, in this case, an Austin mansion stuffed with the goodies that millions of dollars in sponsorships and endorsements can bring. “Armstrong doesn’t want to move, he has to,” writes the author portentously. “His sponsors have abandoned him, taking away an estimated $75 million in future earnings.” Of course, they did so since, after years of rumors and outright accusations, it has finally been established without doubt that Armstrong won his races, including several Tour de France titles, with the aid of performance-enhancing drugs. Macur is a no-stones-unturned reporter on that score, assembling a convincing history of that shadowy subject and establishing that competitive cycling and doping have always gone hand in fingerless glove. However, though Macur is scrupulous in allowing Armstrong plenty of room to have his say, there’s not much here that we didn’t learn in the course of the documentaries and 60 Minutes segments that accompanied the bicyclist’s gradual fall over the last couple of years. The reporting is thorough and the writing good, but in the end, the salient facts are really the stuff of a magazine piece, which makes the book overlong. And though Armstrong has freely admitted taking banned substances in all seven of his once-storied Tour de France victories, he lied long enough that one wonders whether it’s best to condemn him to damnatio memoriae rather than spend another moment thinking about him.

Solid sports journalism, though perhaps in the service of an unworthy cause—and, cautionary tale aside, you can bet the chemists are working on something new for the next generation of racers to take.