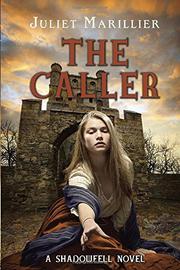 From the Shadowfell series, volume 3

The third and final entry in the Shadowfell trilogy delivers exactly what readers want without feeling either easy or obvious.

After the tragic events toward the end of the second volume, the rebels have regrouped. Neryn, the rebel whose magical skill allows the humans and Good Folk to work together to defeat cruel King Keldec, has only months to complete her training. But her plans are derailed by the appearance of a second Caller, one working for Keldec, and by a storm that nearly destroys one of the four Guardians whose magic permeates Alban and whose training Neryn must undergo. Despite Neryn’s tendency to restate things frequently in her narration, a tic that deeply slowed the second volume, this entry keeps pace, in part because Neryn has grown into a more proactive figure and in part because the final battle finally arrives. The various threads—primarily the importance of belief and ritual and the struggle between love and duty—come to satisfying, even emotional closings.

Medieval fantasy with a strong female lead and a definitive ending: That’s enough to keep plenty of readers happy.