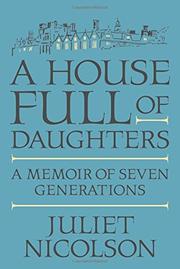 A HOUSE FULL OF DAUGHTERS

A Memoir of Seven Generations

Beginning with her great-great-grandmother Pepita Duran (1830-1871), the flamenco dancer known as the Star of Andalusia, and her doting, if not smothering, mother, the author follows the relationship between mothers and daughters through the generations. Once diplomat Lionel Sackville-West fell under Pepita’s spell, she rejected her mother and lived as his mistress. She adored her illegitimate children despite being ostracized from polite society, including Lionel’s. When she died in childbirth in Arcachon, near Bordeaux, the children were scattered, until Lionel needed a hostess for his posting to the United States. His daughter Victoria stepped in and was a brilliant addition, winning her way into the society surrounding the estate at Knole. She married her cousin, who would inherit the estate, and the difficult birth of Vita ended any semblance of happiness in the marriage. Vita and Harold’s marriage was as happy as it was unconventional: both had lovers of the same sex, she more than he. Her son and daughter-in-law Philippa carried on the family, and Philippa extended the nonmaternal lines that had progressed through the years. This social history and story of family relationships is also the tale of Knole, the ancestral home, and its magnetic hold on those women. In the same light is the pull of Sissinghurst, the home bought by Vita and her husband, Harold, when she was unable, as a woman, to inherit Knole. The first half of the book portrays strong, if flawed, women, while the ending is more autobiographical and, while well-written, more cathartic than interesting.

Readers interested in 19th- and early-20th-century society, especially that of the upper classes, will enjoy this picture of the privileged life, “where loyalty, respect and equality are all held in the highest regard.”