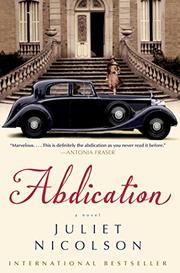 In historian Nicolson’s (The Perfect Summer, 2005, etc.) first fiction, a Remains of the Day ambience is played out against the backdrop of George V’s death and Edward VIII’s ascension to the throne.

Of course, Wallis Simpson plays a role. All this drama, plus a glimpse of Oswald Mosley and Germany's burgeoning anti-Semitism, is seen through the eyes of May Thomas, a young woman raised on a decrepit Barbados sugar plantation. To make her way in the world, and to escape an abusive father, May sails to England with her brother, Samuel. In London’s East End, the siblings are welcomed by a cousin, Nat, now married into a family of Jewish tailors. Sam plans to volunteer for the Royal Navy, but May needs a job. She soon secures employment as a combination chauffeuse-secretary to Sir Philip Blunt, a man intrigued both by her femininity and her familiarity with bookkeeping and Rolls-Royces, skills learned on the sugar plantation. It happens Sir Philip is deeply embedded in the government’s attempt to cope with the romance of the new king and Simpson. Nicolson writes knowledgeably of weekends in the country, swank parties and the ironic-supercilious posture of the British upper class. The novel rings with authenticity. The author’s grandfather, Harold Nicolson, was an English author and politician during the era.

With promise of a sequel lurking in the conclusion, the novel is a period drama ready to be adapted by the BBC and rerun on PBS.