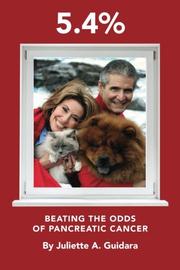 An intimate, thoughtful look at one couple’s journey through pancreatic cancer and recovery.

In Guidara’s debut memoir, she chronicles a painful and inspiring year with her husband, Frank. Her book begins when the couple receives Frank’s diagnosis just prior to their first wedding anniversary. When Frank turned yellow and a gallstone was ruled out, it turned out he had pancreatic cancer, one of the rarest and deadliest forms of the disease. The chance of his living five years was 5.4 percent. Guidara became fiercely convinced that if Frank listened to his body and treated it with respect, it would keep him alive. Frank himself never behaved as though the cancer could beat him. Guidara, terrified of losing her husband, reached out to medical professionals and friends and family, finally incorporating a number of different therapies into his traditional regimen of surgery, radiation and chemo. As a hypnotherapist herself, Guidara was open to including several Eastern and Western strategies for cleansing and detoxifying the body. Although initially reserved about the practice of Tong Ren, which involves a complicated use of the mind-body connection and anatomical bioelectric signals, she and Frank quickly embraced these methods of acupuncture and healing. Along with praying and relying on many tenets of the raw food movement, Guidara developed a complementary regime of her own to keep Frank strong enough to fight the cancer. Although Frank’s outcome is foretold in the book’s subtitle, Guidara’s moving portrayal of the agony of coping with such a deadly cancer is riveting. She writes in chatty, rapid-fire prose of an almost daily battle to stay strong. Her desperation to find and try anything that might help him, along with her willingness to lay bare her fears and hurts—even sharing that she stockpiled sleeping pills just in case Frank didn’t make it—gives a raw account of the emotional roller coaster that started with a cancer diagnosis.

A stirring, inspiring account of one couple’s story of surviving cancer.