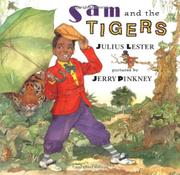 SAM AND THE TIGERS

A sassy retelling of Little Black Sambo, set in the imaginary land of Sam-sam-sa-mara, where animals are people, too, and all the humans are named Sam.

When young Sam and his parents, Sam and Sam, go into town to buy school clothes, he chooses the brightest colors he can find. No sooner does he set off down the road than he begins to lose his finery to a succession of tigers—by the last, instead of "I'm going to eat you up," the tigerly greeting is, "You know the routine." The proud tigers meet up, squabble until they melt down, and end up as pancakes on the Sams' table. Pinkney gives the tale a verdant setting in which even trees have faces and almost every creature, from elephants to insects, is clothed in turn-of-the-century garb. Also, unlike Fred Marcellino, whose paintings for a deftly edited reissue of the tale (The Story of Little Babaji, p. 1044) follow the original's more closely, Pinkney chooses not to show the tigers strutting their stuff; the net result is to rob the story of much of its broad irony.

As usual, Lester's prose is fine and funny read-aloud, but the creative interplay of text and pictures doesn't reach the heights of this team's John Henry (1994).