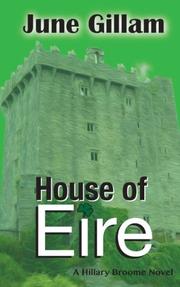 “Ghostwriter” takes on a dangerous new meaning when a woman honeymoons in Ireland and uncovers family closets full of skeletons.

The third in Gillam’s (House of Dads, 2014, etc.) Hillary Broome series finds the disgraced journalist-turned-ghostwriter in Ireland with her husband on a belated honeymoon after 10 years of marriage. Accompanying the couple are her precocious preteen daughter, Claire, and her elderly friend Sarah (whose life Hillary saved in the first book). Hillary is haunted by her mother’s desertion of the family when she was a young girl. While Hillary’s husband attends a gang conference, she intends to bone up on her roots and fill in gaps in her family history. She is also invited to be matron of honor for her friend Bridget Murphy. Bridget is embroiled in a public campaign to stop Dermot Connolly, “a West Coast Donald Trump” who’s rumored to have “his own version of an Irish Mafia,” from building a Disneyland-type amusement park unless it includes a memorial to the millions who were victims of the Great Irish Famine. “Pot O’Gold’s not for history lessons,” the developer threatens (and to be fair, he has a point). But Bridget will not be deterred, even as she begins receiving cautionary ghost dolls as a warning. Her fiance, Seamus, isn’t sure “she understood the forces she was up against.” But he does, as Connolly charges him with stopping Bridget’s public campaign against the park. When Bridget is inevitably murdered, Hillary becomes torn between continuing the historical research that got her friend killed and protecting her daughter and Sarah. “I know you’re going to do what you want, no matter what I say,” her husband capitulates. This is one of the intriguing heroine’s most formidable features. The book takes a bit of time to get going (and it’s pretty clear who the culprit is) but the momentum and the suspense build steadily. And the author has created a striking protagonist. Hillary remains devastated by Bridget’s death (“Guilt weighed on Hillary’s shoulders like a lead cape. She should have gotten to Bridget sooner. While she had a chance to help”). Gillam does violate the rule of Chekhov’s gun: Hillary states that she knows karate and can take care of herself, but readers never get to see her in action. Maybe next time.

This tale offers a strong character study rather than a surprising murder mystery.