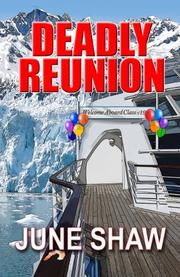 A mini–class reunion on an Alaskan cruise is a disaster from day one.

Widowed Cealie Gunther hasn’t seen most of her classmates in years. But she’s still not ready to meet Sue Peterson, who used to be her Uncle Stu before plastic surgery turned him into a stunning woman. The other classmates aboard include Jane Easterly and Tetter Hargroove. Once the most popular girl in school, Tetter admits to a big problem but refuses to talk about it. The last classmate is Randy, a married man with children and grandchildren who is an unlikely addition to the event. Cealie (Killer Cousins, 2009, etc.) feels like a frump compared to her toned classmates. Even worse, her boyfriend Gil Thurman is on board. Gil, who owns a string of Cajun restaurants, wants to marry Cealie, who’s still trying to establish herself as a strong, independent woman. One of Gil’s chefs is on hand to prepare Cajun dishes, and his uncle is the ship’s physician, a job that is more than a sinecure on this trip—especially since the good-looking younger man Sue (or Stu) was flirting with is soon found dead at the bottom of a flight of stairs. Is it accident or murder? Cealie’s curiosity leads her to investigate Tetter’s problem and wonder whether Sue is a killer and why Randy has joined the cruise. Although she’s crazy about Gil and jealous of all the competition on board, she’s unwilling to commit to Gil. Will she survive long enough to make up her mind?

Cealie’s dithering is a bit annoying, but the killer comes as a surprise.