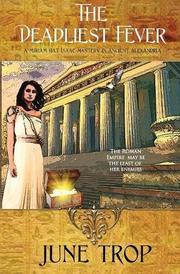 Trop (The Deadliest Sport, 2017, etc.) lends depth and familiarity to an ancient world and adds modern thriller sensibilities in this latest historical mystery novel, the fourth in the series.

Miriam bat Isaac, an aspiring alchemist in first-century C.E. Alexandria, has had a complex life. Having dealt with the dangers of alchemical techniques themselves and people competing with or acting against the Jewish alchemists working on such research, she finds herself in the rare position of both being an expert in alchemical science and in unraveling the conspiracies and threats that beset her and those around her. So it’s all the more surprising when she’s faced with her most puzzling challenge yet—an attack on Alexandria’s Great Synagogue that leaves its Torah mantle damaged. That alone would be a mystery worth tackling, but when her alchemist colleague (and the longtime object of her affections) Judah repairs the mantle, he finds that none of the gems embedded in the sacred object were stolen, leaving the culprit’s motives all the more uncertain. When a missive warning of a veiled need for additional guards at the synagogue appears, Miriam’s concerns only deepen. As she investigates, she finds more and more doubt and confusion about this particularly twisted piece of intrigue, and it’s dark and dangerous enough that it could very well be her last. As in previous books, Trop’s prose is strong, with clean, natural dialogue and a particular flair for the kinetic details of action scenes and the dramatics of disguise and investigation. The complex cultural dynamics of Jewish people in this society are well-researched, a welcome facet of the series. What’s more, even new readers will find themselves caught up in the setting via effective description and a liberal application of culture- and setting-specific terms. Fans of the series may be interested to note that, while this book brings with it the tension and quick pacing of previous entries, it does feature fewer scenes of violence and action-fueled drama. Certainly this is unsurprising, because the previous book focused on Miriam’s brother, Binyamin, and his fellow gladiators, but it’s worth noting this installment’s shift to a greater focus on investigation, questions, and uncertainty.

A historic page-turner that promises to bring fans new and old to the table.