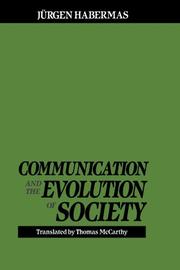 COMMUNICATION AND THE EVOLUTION OF SOCIETY

Habermas, of the Max Planck Institute in Sternberg, West Germany, is arguably the most significant social theorist at work today, though his turgid prose and high-level theorizing will probably bar him from the household-word category. Habermas' stature derives less from the concrete results he has come up with over the past decade than with the sheer scope of his project and the fertility his ""research program"" has demonstrated in such works as Knowledge and Human Interest and Legitimation Crisis. In effect, Habermas has been reworking Kant's philosophy, attempting to lay a new foundation for practical philosophy--i.e., for moral action--in the empirical results of scientific research. In this task, he is working at the edges of several discrete disciplines, and it is his ability to juggle many hats simultaneously that makes him something special. This volume of essays draws on all phases of his work. The first and longest piece, ""What is Universal Pragmatics?,"" puts forth his theory that all communicative speaking (""speech acts"") presumes the meaningfulness of what is said, the speaker's intention of being understood, the truthfulness of what is said, and the ""rightfulness"" of it. With this conceptualization, Habermas wants to argue that speech necessarily contains the imperative of justification and reason, and that some accepted basis of agreement must exist a priori as a structural component of language. In ""Moral Development and Ego Identity,"" he reviews various theories of ego development (Erikson, Piaget, Goffman, et al.) in order to connect the development of an awareness of self with a corresponding system of social norms that integrates the individual into a specific framework of ""communicative competence""--i.e., rules for engaging in meaningful speech acts. These highly esoteric pieces form the groundwork for the remaining three essays in which Habermas, building on the work of Piaget, offers a theory of societal evolution which follows the pattern of individual cognitive development. What emerges is a general theory of development in which the need for justifications of social order become progressively more explicit, leading, he hopes, to a point where all barriers to ""undistorted communication"" would crumble. Heavy going, but the best single dose of Habermas available.