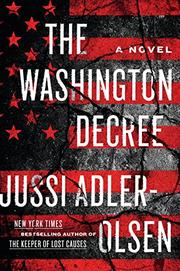 The creator of Denmark’s Department Q, that unforgettable squad of misfit detectives (The Scarred Woman, 2017, etc.), jumps the pond in this ambitious, paranoid fantasy of how quickly things can go wrong in the hands of an American president who’s determined to take a strong stand against threats of violence.

Sixteen years after Virginia governor Bruce Jansen’s first wife, Caroll, was stabbed to death during a very public moment on a visit to China, his successful run for the presidency comes to the worst possible climax when his second wife, Mimi Todd Jansen, is gunned down, perhaps in his stead, on election night. Deeply shaken by the first death, Jansen is so traumatized by the second that observers wonder whether he’ll take the oath of office or resign in favor of Vice President-elect Michael K. Lerner. As it turns out, Jansen not only assumes, but transforms the office, using agencies and executive orders already in place to step up surveillance on his fellow citizens, unplug the internet, defang or shutter critical journalistic outlets, and ban first ammunition, then guns from private ownership. Members of paramilitary militias like Moonie Quale predictably go ballistic, but members of Jansen’s cabinet, many of them touched by personal violence against their loved ones, overwhelmingly support him. So far the scenario recalls that of It Can’t Happen Here, Sinclair Lewis’ classic 1935 novel of homegrown American fascism. Adler-Olsen’s complication is his decision to focus not on a single American oppressed and powerfully radicalized by the new regime but by an oddly assorted group—journalist John Bugatti, presidential press secretary Wesley Barefoot, Sheriff T. Perkins, and staff attorney Dorothy "Doggie" Rogers, whose father is convicted of arranging Mimi Todd Jansen’s murder—who were all present on that fateful day in Beijing.

Despite a disturbing and all-too-plausible concept duly supported by an appendix listing real-life executive orders ripe for tyrannical misuse, this nightmare gradually turns into a standard-issue lots-of-good-guys-versus-even-more-bad-guys scenario populated by characters you’ll hardly miss when they’re killed, as so many of them are.