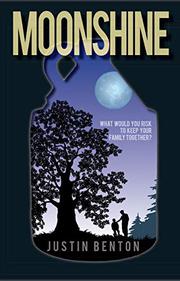 The son of a Depression-era bootlegger tries to turn his father to more lawful pursuits.

Thirteen-year-old Cub can’t remember a time when making shine was legal, his father was a farmer, or his mother was alive. He and Pa spend their nights in the woods near their ramshackle Tennessee cabin, cooking the scant crop of corn their land will grow into moonshine. Change begins when Pa announces that, for the first time, Cub will have to attend school in the nearby town—the local sheriff is threatening Pa with jail time and Cub with an orphanage unless they give up their illegal ways. Not long after, the situation reverses when Mr. Salvatore, a mobster from up North, tries to make Pa an offer he can’t refuse. When Cub attempts to intervene, his father is severely injured, and Cub has to try to find his way out of the mess. Smooth, lyrical writing and crisp regional dialogue are the strengths of this debut. Inconsistent characters are its primary weakness: Cub seems to mature far too quickly into the role of moral arbitrator, and the excuse that his rural school opens his eyes doesn’t hold water; his father vacillates irrationally between strong and weak. The sheriff and the mobster come from central casting. Benton knows his landscape, however, and should be a strong voice for the future.

Characterization flaws keep it from packing an emotional wallop, but it’s still a fine adventure.