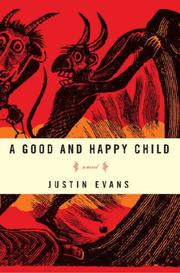 A GOOD AND HAPPY CHILD

A psychological thriller that keeps the reader on edge until the last page.

With occasional echoes of The Exorcist, this debut novel concerns the therapy of George Davies, who must come to terms with what he suffered as a child before he can function as a father. The 30-year-old Davies has a phobia that prevents him from holding his newborn son, thus threatening his previously happy marriage. Seeking the help of a psychiatrist, to whom this first-person narrative is addressed, George reveals that he had undergone therapy 19 years earlier, because of experiences that he has done his best to repress and would plainly prefer not to revisit. Yet he agrees to recount whatever he can remember in a series of notebooks, which constitute most of this novel’s chapters. He details the torment he endured after the death of his father, who had become ill on a humanitarian mission to Honduras. The death leaves the 11-year-old George not only fatherless but friendless, as his schoolmates turn on him with insinuations that there was some scandal surrounding his father. An apparition visits the boy, one that might be a psychological projection of George’s darker side, might be a demon, might be an imaginary (or not-so-imaginary) friend. The Friend (as George refers to him) pushes the boy toward revelations about not only his father’s death, but about his parents’ marriage. Though both academics, George’s parents held very different views on religion, with his father feeling that the devil was a palpably real presence who must be battled while his mother remained more of a modern rationalist, dismissing her husband’s beliefs as superstition. Whether the cause is psychological or spiritual, George as a boy becomes involved in a series of strange calamities that suggest he should be institutionalized. The adult George ultimately realizes that he can’t be a father until he resolves his boyhood mystery.

A haunting story of guilt, denial and the possibility of demonic possession.