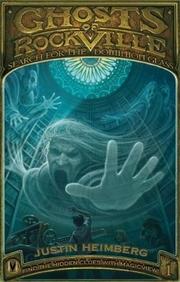 Search for the Dominion Glass

From the Ghosts of Rockville series, volume 1

Young ghost hunters barely start their search for a magical artifact in this fragmentary series opener.

In the wake of a destructive dustup with ghosts in the surprisingly rich rare-book room of their suburban public library, classmates Jay, Pam, Danni and Brian find themselves in a race with shadowy but plainly evil opponents. Their mutual goal is to track down a crystal that can summon and control the spirits of the dead. First, though, they have to secure a certain Key by puzzling out cryptic rhymes that lead in apparently arbitrary fashion to grave markers, nearby crop circles and a local medium. A climactic spectral attack adds a bit of drama, though it leaves the quartet at the end no closer to the Key—much less the sub-titular glass. Along with page images of stodgy background from an “Encyclopedia of the Paranormal” (evidently a fictional one, not to be confused with the two actual reference sources bearing that title), some illustrations look blank until a small, included (and easily lost) square of lenticular plastic is laid over to reveal hidden messages or pictures.