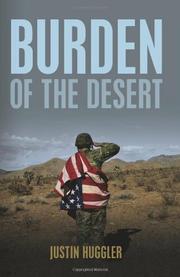 BURDEN OF THE DESERT

Veteran journalist and first-time novelist Huggler offers a fictional chronicle of the conflict in Iraq as seen through the eyes of its participants.

This epic novel tales place between August 2003 and July 2004, soon after the fall of Saddam Hussein’s regime. Chaos reigns throughout the country as various factions of Iraqis struggle for power. With the violence escalating, an undermanned and ill-equipped American military force strives to keep the peace, while journalists try to walk a precarious line of neutrality as they search for their next big story. Huggler creates a diverse cast of characters, including Zoe Temple, a British news correspondent grateful for an assignment to Iraq who finds more than she bargained for, and U.S. Army Lt. Rick Benes, on another extended tour in a place where death lurks around every corner. The author has an uncanny ability to stimulate readers’ senses with his vivid depictions of the landscape and atmosphere of Iraq; at times, readers may feel as if they are right there alongside the soldiers. For example, as Benes walks to a camp latrine, the author details the oppressive heat and stench of human waste carried in the swirling dust. Huggler’s characters, in a series of first-person accounts, express different perspectives on the same events, a narrative strategy that profoundly personalizes the characters and brings them to life. That said, the novel’s main characters largely don’t interact with each other directly, which can sometimes make it difficult for readers to follow the chronology. However, the continuity of this tale can best be seen afterward, when looking at the story as a whole; the thought-provoking truths found between the lines comprise the heart of this work.

An exciting war novel, set in a part of the world that’s never far from the headlines.