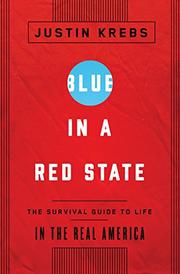 BLUE IN A RED STATE

A Survival Guide to Life in the Real America

Krebs (538 Ways to Live, Work, and Play Like a Liberal, 2010) seeks to paint a portrait of liberals living among the enemy, as it were, by choice.

As a campaign director for MoveOn.org and founder of Living Liberally, a national network of political social clubs, the author writes knowledgeably about people across the country—in Waukesha, Wisconsin; Little Elm, Texas; Fayetteville, Arkansas; Pawleys Island, South Carolina; Pomeroy, Iowa; and elsewhere—who have chosen to stay in a politically unwelcoming environment for a variety of reasons. For some, it’s home, where they were raised. For others, they state that it’s not so bad and that there are residents who, like them, think liberally but keep quiet about it. Many stay because moving to a big city, college, or coastal town is too much like giving up; plus, there’s no challenge there. The author proclaims that equating churches with conservatism is as wrong as equating atheists with liberalism. Furthermore, there are radicals in every way of thought, and liberalism is not immune. Some liberals quietly listen but stand up when called for, giving to and taking part in their communities. Others live provocatively, with bumper stickers and lawn signs for elections, always ready to jump into the fight. The majority love where they live, and they count on their neighbors and return the favor. One woman said her town was a great place to live; it just had no health care, maintained infrastructure, or working educational system. Another mentions that many of the residents think that the recycling program is a socialist plot. Throughout, Krebs approaches his subjects with candor and respect.

From Massachusetts and Florida to Montana and Alaska, with each chapter, both conservative and liberal readers will react strongly, but most will do nothing about it. Hopefully, however, the book will spur discussion and civic action.