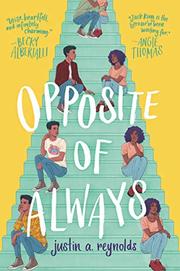 by Justin A. Reynolds

Romeo and Juliet meets Groundhog Day and Love Story in this wonderfully romantic story of teenage love and second chances.

What can Jack say about a college freshman girl who’s dying? That she is beautiful and brilliant? That she loves writing, witty banter, and him? Or that he is destined to meet her over and over again? In this engrossing debut novel, Reynolds creates both a pair of unforgettable protagonists who are doomed to love, lose, and work to find one another again and again and a well-rounded cast of supporting characters. Jack King, who is African-American, is an only child, caught in a love triangle with his two best friends: Franny, a resilient and optimistic Latinx boy, and Franny’s Italian-American girlfriend, Jillian, who is grappling with family issues—and who is the one who got away. All of that changes when Jack meets Kate, an African-American student tour guide, during his visit to her university. When she stands him up for prom, he is heartbroken—even more so when he learns that she has a serious genetic condition. Among the best elements of this supernatural romance are the three-dimensional relationships between Jack and his parents and between him and his two best friends.

A realistic teen drama that tackles complex subjects in an uncompromising way.