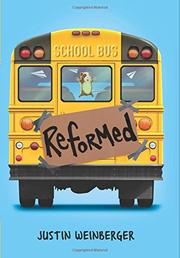 Will Ian’s friendships survive bully school? Will he survive?

East Huron fifth-grader (soon to be sixth-) Ian Hart is loyal to his friends Ash, Mark, and Devon. Devon may not be the nicest kid, but Ian thinks he protects the quartet from bullies. On the brink of summer and the last day of elementary school, Devon trades lunches with Ian and slips his newly acquired PB&J to Max, who’s been trying to befriend Ash and Ian. Allergic to peanuts, Max nearly dies, and Ian and friends land in the Juvenile Academy for Noncompliant and Underachieving Students, a summer camp for bullies. If they fail to learn their lesson, they’ll end up in the KinderCorp Children’s Village—actual reform school. Though they’re younger by two years than the rest of the residents, Devon befriends the cool kids and blackmails Ian and Ash into giving up their new quirky friends. When Devon’s actions make him uncomfortable, Ian must decide whether to risk being a target or turn a blind eye. The incident that sends the boys to camp in Weinberger’s debut sets an unrealistic tone that the story never shakes. What four sets of parents would allow their kids to be sent away for an act so obviously perpetrated by one? The realistic relationships among the kids can’t save this at-times confusing tale of troubled preteens. The cast appears to be a largely white one.