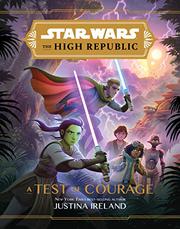 A TEST OF COURAGE

From the Star Wars: The High Republic series

After rogue bandits catastrophically sabotage a luxury liner on its passage across the stars, a group of young survivors finds refuge on a distant moon far from home.

The hubbub at Port Haileap surrounds the opulent Steady Wing, a vessel with a course set for a commemoration of the launch of Starlight Beacon, the Republic’s latest emissary for hope across the wild of the Outer Rim. Vernestra Rwoh—a green-skinned child prodigy and newly appointed Jedi Knight of 16—must accompany and protect senator’s daughter Avon Starros, a precocious 12-year-old brown-skinned girl with a science-oriented mind. Joining Vern’s mission is J-6, Avon’s sassy bodyguard droid. Shortly after takeoff, explosions rock the Steady Wing, killing almost all the passengers. Vern, Avon, and J-6 manage to escape, joined by Honesty Weft, the distraught son of an ambassador who perishes, and Imri Cantaros, a 14-year-old Padawan who loses his master. With little recourse, the group lands on a far-off moon thick with peculiar jungles and deadly rain, eluding the grasp of dangers that shadow them. This tale ends with a promise of more dangerous times ahead, and Ireland’s attention to conflict building feeds nicely into that guarantee. Rich internal third-person dialogue reveals dollops of inner turmoil for each character (sans droid) at key moments as well as providing some much-needed worldbuilding to make this a winning choice.

A great read for Star Wars fans young and old.