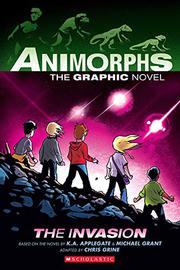 From the Animorphs Graphix series, volume 1

After a night at the mall, a group of kids encounters an alien, forever changing their lives.

Jake, Marco, Tobias, Cassie, and Rachel cut through a construction site to make it home before curfew when a spaceship heading straight for them lights up the sky. They approach the ship and meet a dying Andalite who has just fled a Yeerk ambush. The Andalite, an alien with the power to morph, tells of the invasion the sluglike, parasitic Yeerks have planned for Earth. Other Andalites will come to help—but not for some time. Before his gruesome death, the Andalite bestows the children with the power to temporarily turn into any animal they wish, as long as they have first acquired its DNA via touch. Following their bizarre night, the group—with Jake as their reluctant leader—must decide whether or not to battle the Yeerks. The decision is made when they realize Jake’s brother has been taken over by a Yeerk. Determined to save their town, the group embraces their abilities and fights back. This text-heavy graphic novel is full of action-packed panels and detailed, realistic illustrations. The narrative is engaging and may encourage readers to learn about animals. However, the intensity of the murderous undertones may scare younger readers. Cassie and Marco are brown; the rest of the main cast is White.