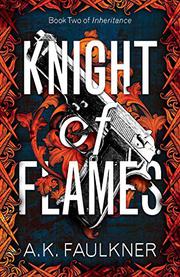 Two lovers with supernatural powers meet others with similar abilities in this sequel.

British Earl Quentin d’Arcy, who’s convinced his father killed his mother six years ago, fled his home country. The 25-year-old has kept a low profile in San Diego, California, which has recently proved rewarding. He’s now dating and in love with Laurence Riley, who lives and works at a flower shop with his mother, Myriam. Laurence, the more sexually experienced of the two, is taking things slowly. Physical intensity tends to spike Quentin’s anxiety, which causes him to lose control of his telekinesis and potentially put Laurence in danger. Laurence has talents as well, including precognition, but Quentin soon realizes they aren’t the only people with superpowers. He catches the attention of Kane Wilson, who wants to know why his mind control doesn’t work on Quentin. Wilson has been “liberating” teens with special abilities and helping them learn to control them. Quentin’s association with Wilson’s group leads to his discovery of another power: creating fire. This unfortunately ties to Laurence’s cryptic vision of the future—Quentin in his arms and both men seemingly on the verge of a fiery demise. Laurence and Quentin begin to suspect Wilson isn’t so much charitably aiding youngsters as he is amassing a team of superpowered fighters. Quentin then takes a risk by accepting Wilson’s offer to join them, with the hope of staying close and uncovering what the man is truly planning.

In Book 2 of this lively urban-fantasy series, Faulkner (Jack of Thorns, 2019) immediately depicts Laurence and Quentin basking in an already established romance. This sets a consistent pace from the beginning, which the author maintains by providing expository bits to catch up new readers. The couple’s relationship shows signs of evolving, as they continue to learn about each other’s families and personal histories and occasionally suffer pangs of jealousy. Though their intimate scenes of exclusively kissing may seem straight out of a YA novel, they progressively turn steamier: Quentin “pressed himself against Laurence’s body, stifling his panic against the other man’s flesh, biting down on his shoulder to keep himself from tipping over the edge.” These scenes deftly showcase two men who are savoring their romance. But Myriam, who shined brightly in the series opener, has disappointingly few appearances. Picking up the slack is Quentin’s twin, Freddy, who manages to find his brother in San Diego. Freddy is both smart and helpful as well as a standout character thanks to his affectionate nickname for Quentin: Icky (an abbreviation of his middle name, Ichabod). The supernatural element, as in the preceding book, never completely monopolizes the narrative. Nevertheless, there are plenty of new, intriguing characters in Wilson’s group, who sport varying powers, from electrokinesis to an uncanny stealth capability. Laurence and Quentin, meanwhile, hone their formidable skills, including the former’s attempt to induce a vision that reveals a past, rather than a future, event. The effective final act boasts action, characters in peril, and a denouement that, not surprisingly, teases the next volume.

An energetic urban-fantasy sequel that skillfully expands the saga’s worldbuilding and cast.