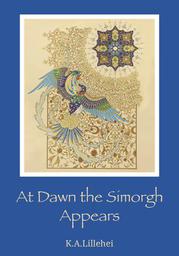 AT DAWN THE SIMORGH APPEARS

In this debut novel, gunmen capture an archaeologist and her interpreter during a visit to ruins in Iran.

Anna, a professor from the Pacific Northwest, met Farah in Paris. She hired Farah to interpret Persian for her at ancient Iranian ruins. The excursion takes a dangerous turn when armed men kidnap the women and drive them to a holding cell. Now, Anna and Farah suffer darkness, strange animals sniffing at the door of their stone prison, and the stress of an unknown fate. To maintain their courage, the women exchange memories of childhood. Farah talks of her beloved father and sisters and time spent in a poppy field. Anna remembers a lonely but satisfying life with her grandparents on Bainbridge Island, surrounded by books and horses. Eventually, a young boy named Samir brings the prisoners bread, cheese, and water. Through his visits, they learn of tension among the gunmen. Some follow the commander, Arash, whom Anna finds striking from a distance. Others obey the vicious upstart, Hassan, who was part of a group that killed Samir’s mother and sister. While examining Anna at knife point, Hassan lightly draws the blade across her flesh to threaten her. Even if the women do escape, they may not get far. Lillehei’s novel embodies how Anna feels about the desert, which possesses beauty that she finds to be “subtle and hidden.” Tightly held secrets inform several characters’ arcs, the most shocking being Samir’s. Readers learn about Persian language (“joon” means soul) and myth. The simorgh is the “eternal bird that nests in the Tree of Knowledge, messenger between sky and earth.” How this legend relates to the plot may require patience from audiences who prefer overt spectacle in their epic adventures. The author does crank up the tension incrementally, but the burgeoning friendship between the analytical Anna and the emotional Farah remains the focus. Lovely moments abound, as when “the azure skies” and “the pastel array of colors of the air where it met the white wisps of cloud” summon the women home. A key incident leads one of the protagonists to an intriguing finale.

A grandly emotional piece that celebrates family and the overlap between Eastern and Western values.