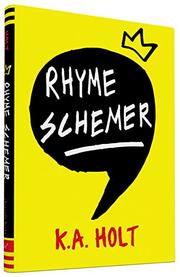 A class bully with poetic leanings gets a painful dose of his own medicine.

In this middle-grade novel in verse, Holt explores the cycle of violence and alienation that can result from parental neglect. Twelve-year-old Kevin is the self-professed “[k]ing of the seventh grade,” the youngest of five boys and son to two preoccupied physicians. He starts off the school year by choosing class runt Robin and the mole on his new teacher’s face as the unwitting subjects of his derision—anything to help shore up the self-worth his abusive older brother Petey has made it his mission to erode. With a motto of “So many / weenies. / So little / time,” Kevin sets about publicly humiliating Robin and otherwise becoming a menace to the community. Though a tormentor at school, at home, bullied Kevin laments feeling “lost all the time / A toy in a shoe / A sock in the trash” and takes refuge by composing his thoughts in a notebook of poems. When Robin gets hold of the notebook and exposes Kevin as a poet, the tables turn, and both boys must reckon with the motives behind the pain they’ve inflicted. Holt draws a fairly straight line between cause and effect, weakening the artistry of her tale but making it one that most readers will readily understand.

While Holt’s simplistic plot resolves a bit too neatly, this transformative tale offers important lessons for all persuasions of middle graders, whether bullies or targets, complicit or horrified bystanders.