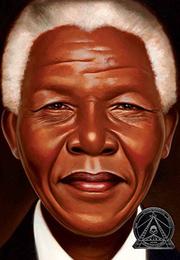 An inspirational ode to the life of the great South African leader by an award-winning author and illustrator.

Mandela’s has been a monumental life, a fact made clear on the front cover, which features an imposing, full-page portrait. The title is on the rear cover. His family gave him the Xhosa name Rolihlahla, but his schoolteacher called him Nelson. Later, he was sent to study with village elders who told him stories about his beautiful and fertile land, which was conquered by European settlers with more powerful weapons. Then came apartheid, and his protests, rallies and legal work for the cause of racial equality led to nearly 30 years of imprisonment followed at last by freedom for Mandela and for all South Africans. “The ancestors, / The people, / The world, / Celebrated.” Nelson’s writing is spare, poetic, and grounded in empathy and admiration. His oil paintings on birch plywood are muscular and powerful. Dramatic moments are captured in shifting perspectives; a whites-only beach is seen through a wide-angle lens, while faces behind bars and faces beaming in final victory are masterfully portrayed in close-up.

A beautifully designed book that will resonate with children and the adults who wisely share it with them.