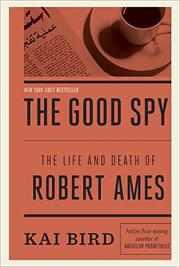 The Life and Death of Robert Ames

A poignant tribute to a CIA Middle East operative who helped get the Palestinians and Israelis to talk to each other—and died for it.

Accomplished, wide-ranging author Bird (Crossing Mandelbaum Gate: Coming of Age Between the Arabs and Israelis, 1956-1978, 2010, etc.) has great sympathy for Philadelphia native Robert Ames (1934-1983), who came of age in the late 1950s, became a CIA agent and worked efficiently in building trust between Palestinians and Americans. In the late ’60s, the CIA, headed by Richard Helms, worked with Henry Kissinger’s National Security Council and President Richard Nixon in managing the tense situation in the Middle East, where Jordan was on the brink of civil war, squeezed by Yasser Arafat’s PLO and Israel. Through his friendship with pro-American Lebanese businessman Mustafa Zein, Ames cultivated a long-running relationship with PLO operative Ali Hassan Salameh,“the Red Prince,” which helped bolster the legitimacy of the PLO. Promoted to chief of covert operations in most of Arabia, Ames took huge risks by bringing Salameh in a highly secret visit to the United States and even meeting Arafat. Keeping “back channels” open during the Iran hostage crisis occupied years of Ames’ career, all while he maintained contact with Zein after the Mossad’s assassination of Salameh in 1979. Moving from CIA operations to intelligence under William Casey, Ames was appalled by Secretary of State Alexander Haig’s tacit support for Israel’s invasion of Lebanon in 1982 and worked “desperately to unchain Washington from its rote support of Israeli behavior.” He would be sacrificed in the conflagration, one of numerous victims of the terrorist truck bombing of the U.S. Embassy in Beirut on April 18, 1983.

A low-key, respectful life of a decent American officer whose quietly significant work helped lead to the Oslo Accords.