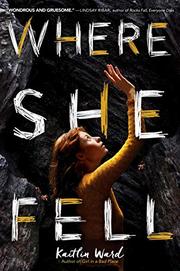 A teenager battles social anxiety disorder and giant bugs in a subterranean world.

When two bad friends to whom she’s been clinging trick her into venturing into the ominously named Drowners Swamp, Eliza falls into a sinkhole that leads into a seemingly endless cave system. Being an avid fan of caves and geology, Eliza is as enthralled as she is terrified—a mix of emotions that remains unaltered as she encounters a small community of likewise trapped people surviving on a diet of outsized spiders and cave insects. Weeks later she is captured (briefly, thanks to a conveniently timed spider attack) by bioluminescent humanoids. All the while, despite having been in therapy for years, she continually denigrates herself for panic attacks and freezing up around others. Her emotional reactions take up so much of the narrative, in fact, that for all its lurid, occasionally gruesome turns, it’s hard to tell whether character or action drives the story more. In the event, Eliza is surprised to find reserves of inner strength—and a chance at personal transformation—through her ordeal. The first-person narration is punctuated with excerpts and sketches from Eliza’s journal. Except for one character with brown skin, the nonglowing cast defaults to white. Warring themes and elements give this outing a distinct feel of multiple stories yoked together by violence.

Melodramatic but definitively all over the place contentwise.