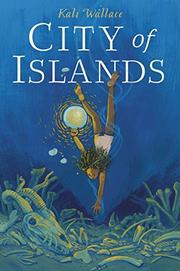 Life is not easy for 12-year-old Mara in the magical archipelago City of Islands.

Her parents died when she was 5. After begging on the streets of Quarantine Island, she was taken in by a quirky bonemage, Bindy—but one night over a year ago, Bindy went out and never returned. Now working as a diver for the Lady of the Tides, Mara has a chance to prove herself and secure her future. The Lady is obsessed with finding magical remains left by the founders, a race of sea people who built the city centuries ago. After overhearing a tip from a strange, pale-skinned boy, Mara decides to dive in a new spot for ancient magical artifacts, along with her friend and fellow diver Izzy and the boatman Driftwood. What they find shatters Mara’s innocence, alters the course of their lives, and reveals secrets that will change the City of Islands forever. Wallace builds intrigue, layer by layer, page by page, until readers are glued to each word right up to the magnificent end. The captivating worldbuilding is supported by a sturdy third-person narrative that’s filled with people of various skin tones, personalities, and abilities who find a way to work together to right the wrongs of corruption. Mara and most other denizens of the City of Islands have “brown skin, brown eyes, and curly black hair.”

Inspiration and excitement from beginning to end.