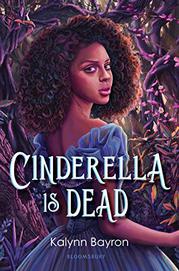 In Mersailles, “Cinderella” is more than just a fairy tale: It’s the basis for a harsh monarch’s throttlehold on his kingdom.

Sophia is turning 16, the age at which young women must attend King Manford’s annual ball, at which they are scrutinized by and married off to male attendees. Any young woman who has not been claimed after her third ball is destined to spend the rest of her days engaged in hard labor. But being chosen can be its own curse in a society where domestic violence is common. Sophia is a beautiful Black girl in love with dark-haired Erin, one of her best friends. While racial diversity is a natural part of this world, the same acceptance does not exist for those who defy rigid gender norms: Anything other than heterosexual desire is strictly forbidden, and while Sophia wishes to escape as a couple, Erin is too fearful. After fleeing the ball, Sophia stumbles across Cinderella’s mausoleum, hidden in the woods. There she meets rebellious Constance, an attractive young red-haired woman with a very personal motivation for sabotaging the monarchy. As the two grew closer—and sparks fly—they discover secrets that could end Manford’s cruel reign. This promising debut deals with themes around rebellion and empowerment as well as the toll that rejecting the status quo can take on relationships. The atmospheric setting is a particular strength, and the twists and turns will keep readers in suspense.

Will both entertain and encourage reflection.