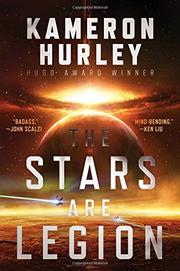 THE STARS ARE LEGION

A warrior without a past and her treacherous lover fight to bring their literally decaying world a new future in this thought-provoking space opera.

The Legion is a collection of organic world-sized ships, each populated with an all-female clan that endlessly battles with the other ships' clans. The amnesiac Zan has been taken in by the brutal (and female, despite her title) Lord Katazyrna and repeatedly instructed to invade the world of the Mokshi, which apparently holds her memory. Who is Zan? What is her true relationship with Jayd, the attractive woman she somehow knows she can't trust and who is promised to Rasida, lord of the Bhavajas, bitter rivals of the Katazyrnas? When the Bhavajas reject peace and leave Zan for dead many levels below the surface of the Katazyrna world, Jayd is left alone to fulfill the plan that she and Zan developed to combat the rot infesting all the Legion world-ships. Meanwhile, Zan struggles her way back upward, discovering new civilizations and new information about herself, forcing her to wonder if she truly wants to return to the woman she used to be. Amnesia can be a handy plot device to learn about a new situation along with the protagonist. But Hurley (The Geek Feminist Revolution, 2016, etc.) really makes the reader work toward understanding. Some things she never explains: are these characters human, and if so, how did human civilization become a network of space-dwelling, womb-swapping women who periodically become pregnant via parthenogenesis, primarily giving birth not to children but to organic technology? It seems likely that Hurley wants the reader to think hard about this default: many readers might not question a science-fiction adventure story populated solely with white males. So why should we question an SF space adventure populated solely with dark-skinned women?

Perhaps not satisfying in a conventional way; but then, it’s clearly not meant to be.