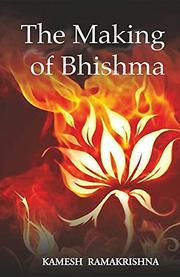 The Making of Bhishma

In this debut installment of Ramakrishna’s retelling of the Indian epic, the Mahabharata, warrior Devavrata Bhishma recounts a long road of intrigues and misunderstandings that led to his renunciation of a crown and the eventual eruption of a war.

Devavrata is captured by his grandnephew Yudhishthira and mortally wounded by his former lover, Amba. Knowing that the arrowhead lodged in his lungs could kill him at any time, he agrees to tell Yudhishthira his life story. He starts with his mother’s suicide, which was caused by the harsh limits on the number of children that Devavrata’s father, Shantanu, had placed on Hastinapura families. After her death, Shantanu fell in love with a Naga girl, Satyavati, who—to protect her future children—demanded that Devavrata give up his royal claims. Devavrata had fallen in love with her as well and yielded to her desires, but they treated each other as enemies ever after. Tragedies haunted Devavrata through the four regencies he served, including the mysterious death of his nephew Chitrangada, which earned Devavrata the title of Bhishma (“The Terrible”), and the murder of his only son, Shikhandin. Yudhishthira and Vyaasa Shukla—Satyavati’s brother and the leader of Hastinapura’s society of poets—listen and contribute to Devavrata’s tale as the archivist and mnemonist Lomaharshana preserves the words for posterity. As they each take turns illuminating their corner of the story, it’s a joy for readers to watch how the characters, and their understanding of each other, shift. Ramakrishna’s explanations of the relevant traditions of Hastinapura, and the other societies around it, help to pace the heavier revelations. He also uses Devavrata’s descriptions to capture the Hastinapuran civilization, drawing from historical records and explaining details in appendices and frequent asides. The sheer amount of reference material can be overwhelming, especially when it repeats itself—for example, the etymology of the name “Drona” is explained three separate times—but the complex narrative and sociological elements justify its inclusion.

A unique, entertaining attempt to reconcile the ambiguities of an ancient myth with its archaeological record.