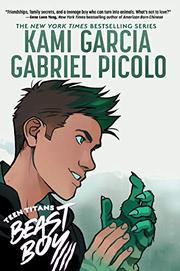 From the Teen Titans series, volume 2

A high school senior works to reinvent himself and inadvertently discovers his mutant superpowers.

Garfield Logan is a self-deprecating 17-year-old with green-streaked hair and an obsession with working out and eating so he can bulk his way up to becoming popular with girls. It’s almost the end of the school year, and nothing on his bucket list has been accomplished: He doesn’t have the girl, he doesn’t have the income from the pizza job he wants, and he is very much on the outside of the in crowd. Fed up with being alternately ignored and bullied by the cool kids, Gar completes an outrageous dare that instantly gains him a following and new nickname, Beast Boy. Precariously balancing his new popularity and some unexpected physical transformations with maintaining his true, close friendships, Gar successfully goes with the flow until things get dangerously out of hand. This follow-up to Teen Titans: Raven (2019) serves its purpose in providing an origin story for Beast Boy and connecting the series storylines with recurring characters but without the high-stakes action, intrigue, and depth of the former. Although the visuals are dotted with bursts of brightness and creative framing, the story is weakened by outdated language, insufficient character development, and a scattered plot. A neurodivergent character is identified within the text while racial diversity is represented in illustrations.

A quick read for fans.