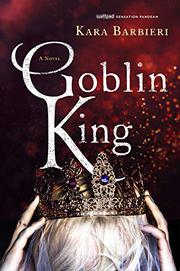 From the Permafrost series, volume 2

A young woman goes to Hel and back to stop Ragnarök in this sequel to White Stag (2019).

Having survived the Hunt, goblin Soren rules as Erlking while once-human Janneke grapples with her role as the stag. Once master and servant, now lovers, both are struggling to take on their new responsibilities and overcome their many, many traumas. Raised as a male heir in a vaguely Viking-ish era and held as a Permafrost realm prisoner for 100 years, dark-skinned, green-eyed Janneke is as lethal as her former captors, the goblins, but capable of emotion. Now an untrained magic-user and unwilling recipient of apocalyptic visions, Janneke is also haunted by her abuser, Lydian…“literally,” as the characters would (and repeatedly, gratingly) say. Attempting to use—then exorcise—the liminal Lydian, Janneke and a small circle of trusted goblins dive deep into the Norse underworld. Unwaveringly, perhaps unbelievably, supportive Soren is pale and bluish-skinned, white-haired, and lilac-eyed—for goblins, read prettified Celtic elves or Scandinavian trolls, per the novel’s loose basis on and reinterpretation of traditional mythology. The setting, tone, and language are inconsistent and unclear, with the pre-industrial trappings repeatedly clashing with the innumerable, jarringly modern turns of phrase and copious profanities. Barbieri prominently features issues of abuse, disability, eating disorders, self-harm, and gender, but the quality of the writing does not support sensitive and nuanced exploration of these subjects.