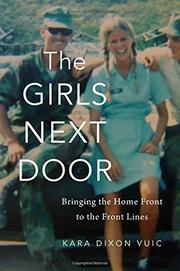 THE GIRLS NEXT DOOR

An adviser to a PBS documentary on the United Service Organizations, Vuic (War, Conflict, and Society/Texas Christian Univ.; The Routledge History of Gender, War, and the U.S. Military, 2017, etc.) draws on extensive archival sources to create a thoroughly documented, anecdote-filled history of women’s roles as recreation program volunteers from World War I to the present. Besides illuminating women’s significance in military life, the author chronicles changes in assumptions about gender, sexuality, and race in American culture for the last 100 years. Under the auspices of the Red Cross, the USO, and the military’s Special Services, young women worked on bases and battlefields “to distract lonely men from war’s boredom and brutality,” serving as “representations of ideal femininity and womanhood, and as reminders of the civilian and domestic life to which the men would return.” Preferred volunteers were college-educated, attractive, vivacious, and independent, eager for the adventure of an overseas assignment. Above all, they needed “to embody a particular kind of middle-American wholesomeness” that would contrast favorably with scantily clad USO performers and “exotic, sexualized native women” such as prostitutes, who thronged around military bases. Volunteers cooked, handed out doughnuts, and danced with servicemen; however, they were warned, romance and sex were not in their job description. During the Vietnam War, the Red Cross rotated women often during their tour to keep them from becoming too close to soldiers. Some volunteers chafed at restrictions, which included living behind barbed-wire fences, obeying curfews, and never leaving camp alone. In 1973, the transition from conscription to the All-Volunteer Force meant that more families accompanied servicemen and servicewomen, changing the volunteers’ role from being “wholesome symbols of desire” to offering programs such as community centers and summer day camp. Still, even with increasing numbers of servicewomen, officials continued to sanction “hypersexualized entertainment,” evidence of the “conflicting, yet intertwined ways” that women have been used by the military.

A fresh contribution to women’s history.