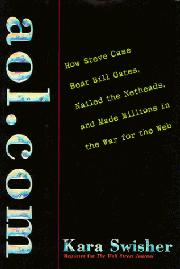 How Steve Case Beat Bill Gates, Nailed the Netheads, and Made Millions in the War for the Web

A thorough, thoughtful account of how America Online left its status as a lark to become the much-maligned but presently undisputed king of online services. Swisher, a reporter for the Wall Street Journal, was given unprecedented access to AOL head Steve Case for her book, and it is from Case and other inside sources that she’s gotten much of her material. She records, for instance, a 1993 confrontation between Case and Microsoft head Bill Gates, wherein Gates tells Case, “I can buy 20 percent of you or I can buy all of you. Or I can go into business myself and bury you.” Gates’s cockiness backfires in this instance, as he never is able to either acquire any significant portion of AOL or get his own Microsoft Network to attract much of AOL’s audience. Case’s battle with Gates is summed up well in Case’s own argument that Microsoft’s Windows platform had become to PC users what the dial tone is to the telephone—a minimum basic requirement for usage. For Gates to exert undue control over this computer “dial tone,” Case was able to argue successfully, would be an unfair advantage. Still, Case has to battle over the course of Swisher’s chronicle with his own users over the service’s charges (he eventually settles on a flat rate of $19.95 per month, but not without taking serious losses along the way); and with the government and its Communications Decency Act, which AOL’s lawyers were instrumental in fighting in federal court. He also has to contend with the issue of sex on the Internet, knowing well that much of AOL’s revenue is based on cybersex and other forms of adult entertainment. Swisher never sensationalizes these hot topics. Her book is a solid study of the birth, growth, and struggles of this computer giant. (Author tour)