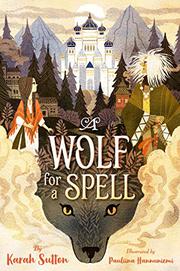 A WOLF FOR A SPELL

The lives of a wolf, a witch, and an orphan are intertwined in this fantasy.

This story inspired by Russian fairy tales is told in alternating chapters by three characters: the witch Baba Yaga, a young female wolf named Zima, and an orphan girl named Nadya. Nadya, wandering in the forest near the orphanage, is determined to escape her life of drudgery, but she is torn between her need for freedom and her longing for a home. Meanwhile, Zima the wolf is also struggling with feelings of restlessness and insecurity. Her older sibling has told the pack to kill humans, but when Zima comes upon Nadya in the forest, she doesn’t kill her; and worse, Zima brings a younger wolf sibling, injured by a human, to the feared and hated witch, Baba Yaga, to be healed. Baba Yaga agrees on the condition that Zima switch bodies, through a spell, with her. Thus begins the enmeshing of the three main characters’ destinies. The plot’s many interesting twists are, however, undercut by a less-than-clear delivery. Italics rather than quotation marks are used to denote when animals are speaking (why?), which makes things confusing when Zima and Baba Yaga switch bodies and thus modes of speech; moreover, clunky contrivances jar the finer originality of the whole. The theme of the value of family and friends seems too thin and ordinary for such a complicated plot—something more revelatory is expected. The black-and-white illustrations, however, have a stark, effective beauty.