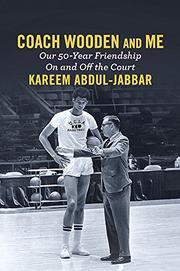 COACH WOODEN AND ME

Our 50-Year Friendship On and Off the Court

Abdul-Jabbar—the NBA’s all-time leading scorer who is now a writer of essays and books (Writings on the Wall: Searching for a New Equality Beyond Black and White, 2016, etc.)—notes several times the oddity of the friendship between a towering, urban African-American and a much smaller white Midwesterner with deep Christian convictions. But their friendship continued until Wooden died in 2010 at the age of 99. After summarizing his boyhood, the author tells how he decided on UCLA (he was the nation’s most sought-after high school player) and how he adjusted to West Coast life and Wooden-style basketball. During his college days, freshmen couldn’t play varsity, and dunking was proscribed, so who knows what wonders he could have otherwise achieved? Throughout, Abdul-Jabbar asserts continually that it was Wooden’s example that became most meaningful to him. The coach believed in physical fitness and team play, and he lived by a high ethical standard that deeply impressed the author, who can hardly bear to mention the coach’s (few) stumbles—though he does devote a chapter to them, a chapter that pales in comparison to the positive ones. Abdul-Jabbar’s style is free and easy, with some flashes of humor. An occasional error appears on the score sheet—Carl Stokes was the mayor of Cleveland, not Detroit—but the author is candid about his attitudes toward the racial turmoil of the 1960s, his conversion to Islam, his experiences suffering racial taunts from fans of opposing teams—and, in one grim case, from his high school coach, a conflict since reconciled. The author’s account of his visit to Wooden on his deathbed is wrenching.

A pleasant expression of deep appreciation for a man who changed the author’s life by enriching it.