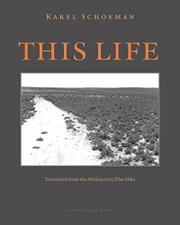 by Karel Schoeman ; translated by Else Silke

In this decades-spanning novel, an Afrikaner woman looks back at her life and the slow evolution of her family.

At the time that Schoeman’s novel opens, narrator Sussie is advanced in age. She’s recalling her life, and that of her family; an early reference to “when the first white people toiled up the passes of the Roggeveld Mountains” gives a sense of the geographic and racial politics to come. The novel, originally published in Afrikaans in 1993, has a pace that unwinds slowly and unpredictably. Sussie sometimes contradicts herself, and it gradually becomes clear that this self-imposed mental journey is arduous. She writes of “running off sentences in a way my slow tongue could never have managed before.” Later, her denials sound almost Beckett-ian: “I cannot remember any more; I do not know any more. I do not want to remember any more.” To the extent that Schoeman’s novel has a shape, it’s one that coalesces very slowly, tracing the evolution of the family’s fortunes through several generations, as they move from prominent farmers toward a more urban existence. Over that time, relatives die, both peacefully and violently, and Sussie remains an observer throughout, grappling with her memories and the quiet and gnawing anguish that comes from roads not taken. Late in the book, Sussie declares, “there is nothing more to tell,” yet the novel hasn’t reached its conclusion. Schoeman brings together the threads of mystery, loss, and progress in a haunting final scene.

For all that Schoeman’s novel summons up grand themes, its handling of them is subtle and sometimes mysterious, arriving at its most powerful moments unpredictably and honestly.